Workshops and mentor sessions were held within UArctic Thematic Network on Local and Regional Development in the North by North-Eastern Federal University Institute of Finance and Economics’ professors for educational institutes in Churapchinsky district, Republic of Sakha (Yakutia), Russia. Around 40 people – academia representatives, university experts and district authorities took part in the workshop.

Workshop on managing the projects for rural schools and kindergartens development was held in Tolon village of Churapchinsky district, Yakutia.

Initiator of this event Oxana Romanova, NEFU, (the leader of the UArctic TN “Local and regional development in the North”) shared successful experience on promotion and developing the innovative project of Bahsyt village school. This project has been awarded third prize for its effectiveness in the local competition among schools of this district, and the head of the school was deservedly recognized as “The Best Head of School” of Churapchinsky district. 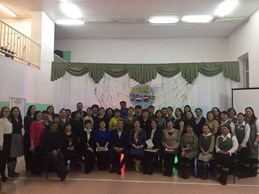 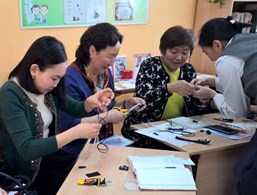 “Students of Bahsyt village school succeed in Olympiads and scientific conferences of different levels. School administration completed and agreement with University of Heilongjiang, China, according which school leavers can be enrolled to this university without passing entrance exams. This is an outcome of the project “From Traditions to Globalization”, says Oxana Romanova. Also, she told that Bahsyt school teachers hold annual International language school, which brings together school children from all over the district and from Yakutsk city with native speaking teachers.

Thematic Network plans to increase the number of schools-participants of the project “From Traditions to Globalization”, as well as involve other districts to take part in workshops on project management.

“The first results of our work are positive. Currently, we work hard on engaging new participants, and plan to organize a conference on rural schools development with participation of municipal administration and local schools”, shares Oxana Romanova.